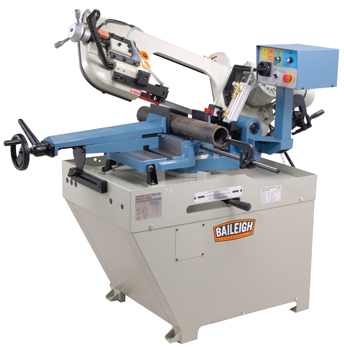 Over the years the BS-260M dual mitering band saw has gone through a number of changes.  Once again we have improved it and made it even better.  Gone is the day of the DC driver board to adjust the blade speed, now the BS-260M has an AC inverter for even better control and reliability, the best part is that it still is powered by only 220V single phase so it can be used just about anywhere.

The gear driven BS-260M is a 9 inch Band Saw is the perfect saw for cutting at 90 degrees or miter angles. This saw has a dual angle head capable of cutting 0-60 degrees (R) and 0-45 (L), making it one of the most versatile saws on the market. Quick releases head lock allows the operator to change the miter angle in seconds.

The BS-260M band saw is made form only the best materials for long production life.  The saw bow and pivot is made from solid cast iron to ensure the straightest of cuts with little to no vibration.  A total of eight precision ball bearings are provided to keep the blade in line as well.  The BS-260M also has a powerful coolant system and a broken blade tensioning device that shuts down the machine if the blade breaks for safety.

Operation of the BS-260M is easy as well; there are two mode of operation depending on you preference. 1- Manual descent for small production runs. The operator simply turns on the machine via a trigger switch in the descent handle, and manually guides the band saw blade through the material this mode is perfect for the small or medium sized fabricators needs.  2- Hydraulic descent for larger production runs increases blade life and reduces operator fatigue. The hydraulic descent has a down feed adjustment for feed pressure.

387
NEW PART NUMBER - RL-WS11-5
Mfg. item #: B-COOL5
BAIB-COOL5
Call for freight quote on this item or we will confirm freight charges before shipping.1
Call for Price