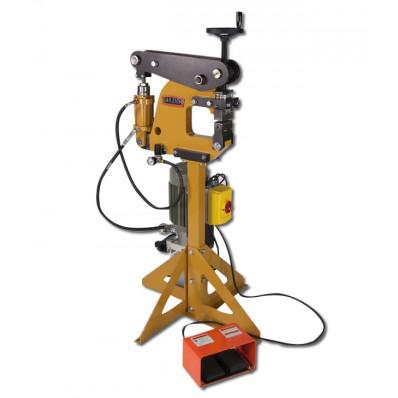 Have you ever had the thought of shrinking anything more than 16 gauge mild steel, but when you try it the machine and jaws just cant quite cut it.  The engineers at Baileigh Industrial had the same problem, this is when the concept for the MSS-14H hydraulic shrinker stretcher came from.  The MSS-14H hydraulic shrinker stretcher is 100 percent made in the USA from solid plate steel and has a deep 7 inch throat allowing even the deepest of metal working.  But the MSS-14H is unlike anything on the market to date, the MSS-14H is actually hydraulically driven by a 110 volt hydraulic system on the down stroke for great power and air pressure assisted on the upstroke for faster movement.  This system allows for between 30 and 40 stokes per minute.

Another unique feature of the MSS-14H shrinker stretcher from Baileigh Industrial is the tooling. The MSS-14H comes standard with one set of four jaws; this set of jaws can do both shrinking and stretching simply by turning the jaws around and installing the correct pads. This is a hydraulic/pneumatic operated machine which is controlled by a foot pedal allowing for hands free operation.  If that wasnt enough the MSS-14H has a mild steel capacity of 14 gauge and an aluminum capacity of 12 gauge.

For more information on the MSS-14H or any of the other Shrinker stretcher from Baileigh Industrial, call a customer service representative.