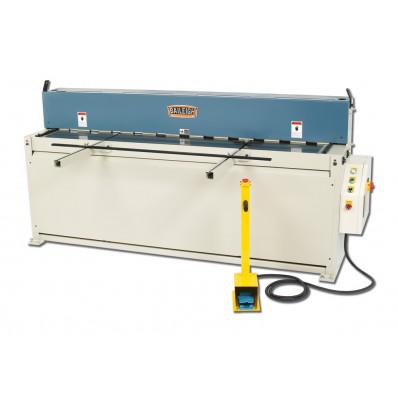 Operating on 220 volt three phase power, the industrial grade hydraulics pull the top shearing head with top blade smoothly through the material being cut increasing blade life. The SH-8014 shear has top and bottom blades have multiple cutting edges that extends blade life. The SH-8014 features hydraulic hold downs that hold the sheet metal firmly against the in feed table eliminating any lifting of material as it is cut which improves blade life.

The SH-8014 hydraulic metal shear has a manual back gauge or material stop as well as front support arms to help the operator handle the sheet metal and provide for repeatable shearing. The operator control panel has a switch that allows the fabricator to jog the blade, for accurate blade adjustment, or go into an automatic mode that is initiated by the foot pedal control.

Contact a representative for more information on the SH-8014.