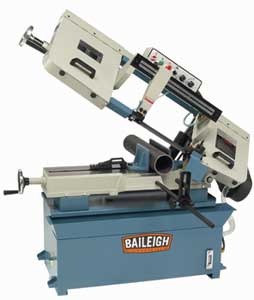 The BS-916M horizontal band saw is based off of the BS-300M, but with a little smaller footprint for those shops that have limited space.  The BS-916M is modeled after the American style saw that has been around for decades and carries over many of those saws traits.   Like all Baileigh industrial bandsaws the BS-916M is built to last, with a full cast iron bed and fully welded base it can take punishment.  An easy to access control panel located on top of the bow makes operation on the BS-916M a breeze.  An automatic shut off feature at the end of the cut, coolant system, and a blade tension device are also included.  Baileigh Industrial designed this saw to take abuse and stay working hard.

Baileigh Industrial typically keeps this the BS-300M band saw in stock for quick deliveries. For further information contact a representative.

144
NEW PART NUMBER - RL-WS11-5
Mfg. item #: B-COOL5
BAIB-COOL5
Call for freight quote on this item or we will confirm freight charges before shipping.1
Call for Price