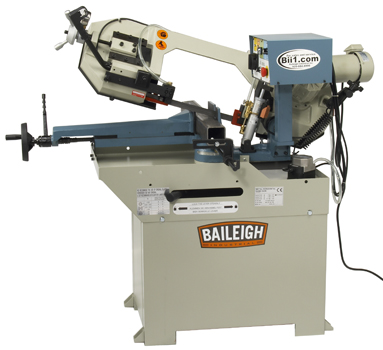 The BS-250M horizontal band saw from Baileigh Industrial is a great saw for any fabrication shops that cut a variety of material and profiles.  The BS-250M is a inverter driven variable speed band saw that allows the operator to precisely adjust the speed for the proper blade and material, increasing the life of the blade and decreasing expensive blade costs.  The inverter drives a 3 hp motor through a gearbox so there are no pulleys to adjust or belts to break.

The BS-250M horizontal band saw is a single miter band saw capable of cutting up to 9 inch round metal stock and can miter up to 60 degrees.  Changing the miter angle takes seconds and the best part is the vise stays in place.  Like all Baileigh Industrial band saws, the BS-250M includes a powerful industrial grade coolant pump that washes away chips before and after the cutting area. This cools the blade teeth, lubricates the blade, and removes the metal chips from the blade making the blade last longer.

25
1 GALLON BAILEIGH CUTTING FLUID ** SHIPPING WEIGHT = 15 LBS
Mfg. item #: 1015033
BAIB-COOL
FREE shipping ONLY when ordered with a machine from this manufacturer otherwise Ground UPS Will Be Added at Order Entry.20
$45.00