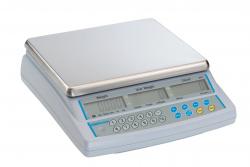 See Tab Below "Key to Symbols" for Definitions

Accurate, fast and versatile, the CBC Counting scales are suitable for most industrial applications.

Key to symbols used : Click on a symbol for an explanation

A
Accuracy
These terms are often used interchangeably to indicate how well a scale displays the correct results. Accuracy is the ability to display a value that matches the ideal value for a known weight.

Animal / dynamic weighing
It is difficult to accurately weigh living animals such as a rabbit, which may move around during weighing. The movement will not allow the display of the balance to show a stable weight and hence the true weight of the animal can not be determined. To overcome this problem, the balances can be designed to offer animal / dynamic weighing mode. The balance works out an average weight based on the force exerted by the animal over an extended period of time. Once the internal calculation is completed by the balance, it will hold the value.

Top of page
B
Balance
A weighing machine. The terms scale and balance are often used interchangeably. Historically a balance was a device that determined mass by balancing an unknown mass against a known mass as with a 2 pan assay balance. In modern weighing machines balances are usually of the design that uses a force restoration mechanism to create a force to balance the force due to the unknown mass.
See also

Battery powered
The balance or scale are said to be battery powered when the units are operated using batteries. The battery powered units are portable and hence are often suitable for field applications.
Baud Rate
The speed of communication when using the RS-232 interface. The greater the number the faster the data is sent between 2 devices. Usually balances use 300 to 9600 baud.

Backlit display
The Liquid Crystal Display (LCD) of some balances is designed to have a backlight for easy reading of weighing results.

Calibration
The procedure to force the scale to display a certain value for a known standard mass. Then any other mass will be determined using the standard as the reference.
Capacity
The maximum weight that can be placed on the scale or balance.

Check Weighing
To compare a weight against limits to determine if the weight is within preset limits.

Date
The balances can be programmed to display and print the date on which the weighing operations were carried out.

Density Determination
Using a balance to determine the density of material, either solids or liquids. (Density is the grams/cubic centimetre). If a solid material is used it is weighed in the air and when suspended in a liquid. The density can be determined either manually or in some balances by using special software. To determine the density of a liquid a special float of known volume is weighed in air and in the liquid.

External Calibration
The calibration process of a balance using a known external weight often referred to as suggested calibration weight.

Top of page
F
Force Restoration
A method to determine an unknown mass by balancing the force due to the mass with another force created by the system using coils mounted in a magnetic field. Also called Servo motor or force motor.

GLP
Good Laboratory Practice or GLP generally refers to a system of management controls for laboratories and research organisations to ensure the consistency and reliability of results. The laboratory balances facilitate GLP Print outs with traceability in terms of date, time, balance ID number, etc.

Top of page
I
Increment
These terms are often used interchangeably to indicate how well a scale displays the correct results. Increment is the value of the finest division of the scale.

Internal Calibration
The calibration process using an internal weight available inside the balance for automatic calibration as on when desired by the user.

Internal Re-chargeable Battery
The digital balances are often powered from an internal battery which is re-charged when it is connected to the main power supply.

IP65 Wash down rated
The IP rating (international protection rating) is defined in international standards IEC 60529 and is a rating for the protection from outside objects like dust and water. IP 65 means that it is dust tight and protected from low pressure water jets. In basic terms it means that the scale or balance is wash down or can be used in a wet environment.

Top of page
J
K
L
Levelling
The procedure to set the balance so the platform is horizontal. This gives the balance a position that is repeatable so the results will be the same if the balance is moved. This is done using levelling feet.
Linearity
The ability of a scale or balance to show the correct value throughout the weighing range. Usually tested by placing known weights on the balance from near zero to full capacity.
Load Cell


Top of page
M
Mass
Mass is a physical property of a material. The mass gives a material weight when gravity pulls the material toward earth. The units of mass are gram and kilogram. The terms mass and weight are often used interchangeably.
Menu
A set of procedures that can be followed to change the characteristics of a balance. The menu is made up of a number of options, called parameters, that can be set at the factory or in some cases by the user.

Top of page
N
O
Off Center Loading
The ability to display the same value when a weight is placed anywhere on the weighing platform. Tested by weighing in the center of 4 quadrants on the platform. Also called eccentric loading or shift test.

Parts Counting
Using a scale to determine the number of parts placed on the platform based upon the average piece weight. the piece weight is either entered by the user or determined by weighing a sample on the scales.

Percent Weighing
Using a balance to determine the weight of an item as a percentage of a reference weight.

RS-232
A method of sending data over wires. Often used to communicate between balances and printers or computers.

Top of page
S
Scale
A weighing machine. The terms scale and balance are often used interchangeably. Historically a scale was a device that displayed weight by measuring a deflection, such as a spring scale. In modern weighing machines scales are usually using springs or strain gauge load cells.
See also Balance.

Security bracket
A bracket integrated with the balance to physically lock the balance to secure it from theft or re-location.
Shift Test
See Off Centre Loading.
Specific Gravity
See Density Determination.
Stability
A scale is stable when the results do not change after a weight has been added to the platform.
Stable indicator
A display that shows when the balance has determined the value displayed will no longer change.
Strain Gauge Load Cells
A method to determine mass using a mechanical component that is slightly bent by the addition of an unknown mass. the amount of bending is measured by special resistors mounted on the load cell.

Tare
To set a display to show zero weight. This is used to remove the weight of any packing or containers so that only the weight of the material within the container is shown. The Tare value is deleted from the remaining weight that can be added to a scale. For example if a scale has capacity of 500g and then 200g is tared, the remaining capacity is 300g. Often Zero is used interchangeably.
Temperature Compensation
The ability to correct any errors introduced to the weighing system due to changes in temperature. Usually this correction is done in software on precision balances and within the load cells of less accurate scales.

Time
The balances can be programmed to display and print the time at which the weighing operations were carried out.

Totalisation
The ability of a balance to store the total weight from a number of weighings.

Top of page
U
V
W
Weighing
To find the weight (mass) of an unknown against a standard known mass.
Weighing unit
The balance can be set to display the weight of an unknown mass in various weighing units such as Grams, Kilograms, Milligrams, Pounds, Ounces, Carats, Grains, Newtons, etc.
Weight
The weight of a object is the result of gravity pulling a mass toward earth. When a balance has been calibrated using a known mass then any unknown mass placed upon the scale will have a weight proportional to the known mass. The units gram and kilogram are often used to describe the weight of on object. It is common for mass and weight to be used interchangeably. A weight can also be any mass that is used, for example to put a weight on the scale.

Top of page
X
Y
Z
Zero
To set the display to show zero weight. Used to reset the zero condition of a scale when small amounts of material are on the platform. Zero does not take away from the capacity of a scale. However it will only work in a very small range around the original zero condition for the scale. Zero and Tare are often combined on one key, the terms are often used interchangeably.